Small bacteria can be a big problem: the dangers of blue-green algae in our municipal water supply 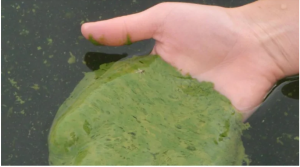 Last week, the three communities I represent in the House of Commons were finally able to lift the water restrictions they had placed on residents this summer.

Thanks to some heavy rains from Hurricane Teddy, the City of Moncton's two reservoirs at Turtle Creek and Tower Road, which provide more than 110,000 people in Moncton-Riverview-Dieppe with drinking water, have finally risen to levels that ease the threat of blue-green algae forming within them.  It’s not a fix, but it is a reprieve. For now.

Another summer of drought and record heat wasn’t just bad news for the quantity of water. It threatened the quality of the water as well.

It’s normal to find blue-green algae in nature in small quantities, but they can cause real problems when they start to multiply and spread. Algae thrive in shallow water, which is warmer and gets more sunlight than deeper water. The Tower Road reservoir only opened in 2014, but 2020 marks the second time already that it has been threatened by blue-green algae.

With climate change, the hotter, dryer summers that are happening more often will continue to threaten that critical water supply.

Now, it's important for me to say our drinking water remained safe this summer and remains safe as we go into fall. The technologies and the expert technicians at our water treatment plant in Turtle Creek made sure of that, as did the water conservation rules the three municipal councils put in place. I didn’t water my lawn, but thanks to their efforts, I didn’t hesitate to pour myself a glass of water from my kitchen faucet.

Nevertheless, any threat to our supply of safe drinking water is a close call for all of us, and we can't afford to keep having these close calls. The best way to treat water for drinking is to have a source that is as clean as possible to begin with.

All blue-green algae can make water smell bad. Some blue-green algae produce toxins that irritate the skin and eyes of people or animals that swim through it. Anyone drinking that water untreated can get ill or even die.

Last month, 350 elephants died suddenly in Botswana and scientists believe they were all killed by blue-green algae blooming in their watering holes. Much closer to home, at least four dogs died shortly after wading in the St. John River during the past three summers. All of those New Brunswick animal deaths were confirmed by scientists to be caused by blue-green algae.

When it comes to projects where the Government of Canada is asked to lend its financial support to the City of Moncton, the members of Moncton city council have made it clear to me that tackling blue-green algae is their number-one priority.

Without clean, reliable drinking water, little else in Moncton-Riverview-Dieppe matters.

If it is the community’s priority, then it is my priority. I am working hard to secure federal funding for the city’s proposed $22 million project.

The City of Moncton wants the money to upgrade the water treatment plant and for other measures to suppress the algae in the reservoirs and other important bodies of water as well.

In the meantime, I can’t help but marvel at how blue-green algae is yet another thing that wasn’t on most people’s radars even a decade ago. Now it has become a significant threat to our health, requiring expensive treatment. The $22 million for combatting tiny organisms in the reservoir is roughly half of what it cost to build the entire Tower Road reservoir itself.

I am proud to be part of a federal government that is willing to strategically invest in what matters most to Canadians, but I never lose sight of the fact the money we invest on Canadians’ behalf comes from all of us. Battling blobs of blue-green algae to save our increasingly precious water will likely be just the beginning of the many ways we will have to spend to combat the effects of extreme weather.

I hope this one local symptom of climate change and what the City of Moncton and Government of Canada will have to do to fix it might help convince the last doubters and deniers of science out there.

Climate change is real, it is here now, and the impacts we humans are having on our natural environment are playing a role.

Whether it’s more and bigger wildfires or more and bigger hurricanes, we are seeing the more dramatic effects of climate change all the time. But our local experience with blue-green algae is a valuable lesson. Climate change doesn’t always have to be as dramatic as a hurricane or a firestorm to profoundly affect our lives.

Combatting climate change and its effects – including some we may not have even imagined yet -- is going to take the sacrifice and combined effort of us all. I am ready to do my part as your MP, which in this particular case means chasing the funds in Ottawa to keep our drinking water safe.

But I am also trying to do my part as a private citizen too, changing the way I live in ways big and small to lessen my personal footprint on our environment. I know many are doing the same, but I invite everyone to join us.